KEY FINDINGS: In most countries, substantial numbers of children are reared by single parents; these proportions are conditioned but not determined by nonmarital childbearing. The regions where children are most likely to be reared by a married parent are Asia and the Middle East, regions where nonmarital childbearing is rare. Children are now most likely to grow up in comparatively small families in East Asia and Europe, mid-sized families in the Americas and Oceania, and large families in Africa, the Middle East, and South/Southeast Asia, though high mortality reduces the number of surviving siblings for African children.

Not surprisingly, the same countries that exhibit high marriage rates and low cohabitation rates exhibit low rates of nonmarital childbearing: these are concentrated in Asia and the Middle East (see Table 2). Even India, which has a high rate of cohabitation relative to other Asian countries (4 percent), still has less than 1 percent of its children born out of wedlock. Thus, children in Asia and the Middle East are more likely to have married parents than in other regions. Among the target countries, the only other country where nonmarital childbearing occurs at a low rate is Nigeria (6 percent).

In sharp contrast, 18 percent or more of births in the remaining countries are to unmarried mothers, a number that has climbed dramatically in recent years throughout much of the world.

The highest rates of nonmarital childbearing occur in Latin America (55–74 percent). The only other countries to share these high rates are South Africa (59 percent) and Sweden (55 percent). The range within Europe is huge: from 18 percent (Italy) to 55 percent (Sweden). Those in North America and Oceania are also high and rising, though New Zealand (47 percent) and the United States (41 percent) stand out, with more than four out of ten births outside of marriage in these two countries.

The percent of children living in single-parent families around the globe has risen in recent years (see Table 2 and Figure 2), partly because of parallel increases in divorce and nonmarital childbearing. Single parenthood is especially common in Africa, the Americas, Europe, and Oceania. For instance, children in South Africa are by far the least likely to live in a two-parent home (58 percent do not). HIV-related orphanhood and labor migration contribute heavily to this figure, as does nonmarital childbearing. In Latin America, high rates of nonmarital childbearing also contribute to single parenthood, though many children live in consensual unions. In Colombia, where 74 percent of children are born outside of marriage, “only” 33 percent are reared outside of a partnership. The United States has the third highest proportion of children with single parents (29 percent) because of its high divorce rate and relatively low cohabitation rate. In Kenya, where both cohabitation and nonmarital childbearing are moderately low by world standards, still 26 percent of children are living with a single parent: as in South Africa, both parental mortality and labor migration likely contribute to this high rate. 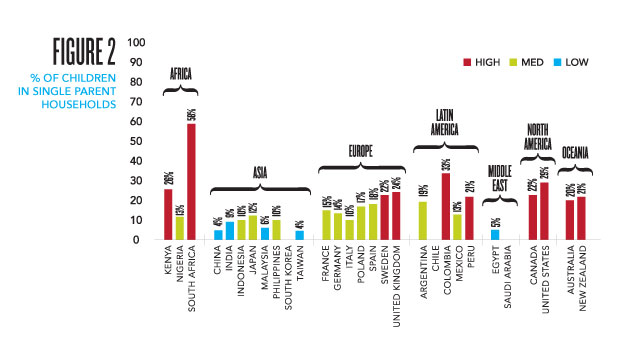 In contrast, several of the countries with low nonmarital childbearing have a higher proportion of children being reared by a single parent. In Indonesia, 10 percent of children under age 15 live with a sole parent, and in Japan it is 12 percent. Divorce has been rising in Japan, but remarriage for women with children seems particularly low.8 In Indonesia, where divorce rates have dropped, abandonment may also be an important part of the picture.9 But in much of the rest of Asia, as well as in the Middle East, children are quite likely to live in two-parent homes, both because nonmarital childbearing and divorce are comparatively rare.

Differences in mortality—both in infancy and early adulthood—mean that not all children born will complete their own reproductive years. The Net Reproduction Rate reflects the number of surviving daughters per woman (rather than the total children per woman given by the Total Fertility Rate). Because the highest fertility countries are also the highest mortality countries, this adjustment reveals a greater convergence in family size than is apparent from the Total Fertility Rate (see Table 2). While there are 5.7 times as many births in Nigeria as in Taiwan, there are only 3.6 times as many surviving daughters. Most of the convergence in family size across the globe historically is a result of declining fertility, but at this stage persistently high mortality in sub- Saharan Africa also contributes to convergence in family size.

Still, global fertility trends indicate that children in Africa generally come from large families, as is also the case in much of the Middle East and South/Southeast Asia. In other regions of the world, children are most likely to have one or no siblings. 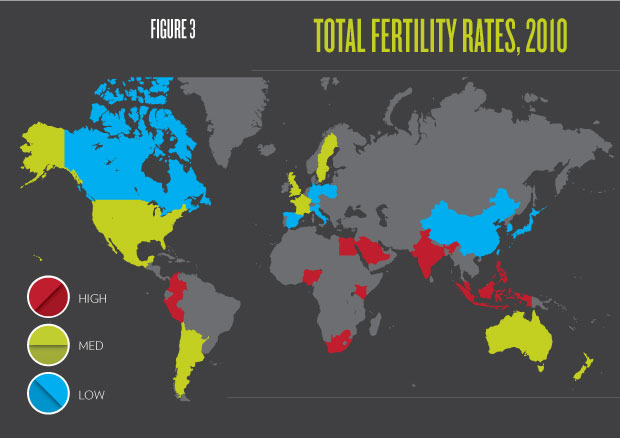 Many countries have witnessed dramatic demographic changes over the last half-century. From the perspective of children, two trends are particularly noteworthy. In much of the world, children are growing up in families that are, by historical standards, quite small; indeed, demographers describe current trends in East Asia and Europe as “lowest-low” fertility.10 Likewise, more and more children grow up in single-parent families, especially in sub-Saharan Africa, the Americas, Europe, and Oceania. It remains to be seen how recent shifts in fertility and family structure are affecting the emotional, social, and economic welfare of the world’s contemporary children.