KEY FINDINGS: Marriage remains the anchor for the adult life course in Asia and the Middle East, with generally high rates of marriage and low rates of cohabitation in these regions. Marriage plays a less dominant role in Africa, the Americas, Europe, and Oceania, regions where cohabitation or nonmarriage are more common. Finally, divorce rates have converged across much of the globe in recent years, but there is still considerable variation in divorce trends, even within regions, with the Americas registering both the highest and lowest crude divorce rates in this survey of global family structure.

Throughout history and in most countries, marriage has played an important role in anchoring the adult life course. But in recent years, and in some regions, marriage plays a less central role in the adult life course than it once did. By examining crude marriage and divorce rates (i.e., annual divorces and marriages per 1,000 adults), and by looking at the percentage of adults cohabiting, this report allows us to paint a portrait of the structure and stability of adult family life around the globe.1

Crude marriage and divorce rates suggest strong regional differences in the centrality of marriage across countries.

Marriage rates are high in Asia and the Middle East (see Table 1). Countries like China (7.2) and Egypt (9.9) have rates that are well above average. In contrast, most European, North American, and Oceanic countries have mid-tier marriage rates, with Australia (5.5), Canada (4.6), France (4.0), Germany (4.6), and Spain (3.8) all falling in the middle. Only Poland (6.6) and the United States are clear outliers (7.3) in these regions. Those in Latin America and South Africa are low, with countries such as Argentina, Chile, Colombia, Peru, and South Africa registering marriage rates below 4. The rates in these countries may be particularly low owing to a relatively youthful population, the popularity of cohabitation (see below), and the prevalence of long-term migration, which makes marriage more difficult. These are also countries where marriage is becoming increasingly delayed.2

The crude divorce rates do not display as clear a regional pattern (see Table 1). Both Asian and Latin American countries are represented at both the top and the bottom of the distribution. Also in Asia, divorce is illegal in the Philippines, which means the divorce rate there is essentially 0. The Middle East has comparatively low rates. Most European and Oceanic countries have moderately high rates, and the United States has the highest crude divorce rate among this survey of global family structure. South Africa’s extremely low divorce rate is not a reliable indicator of marital stability because it is common for spouses there to separate permanently without legal divorce.3 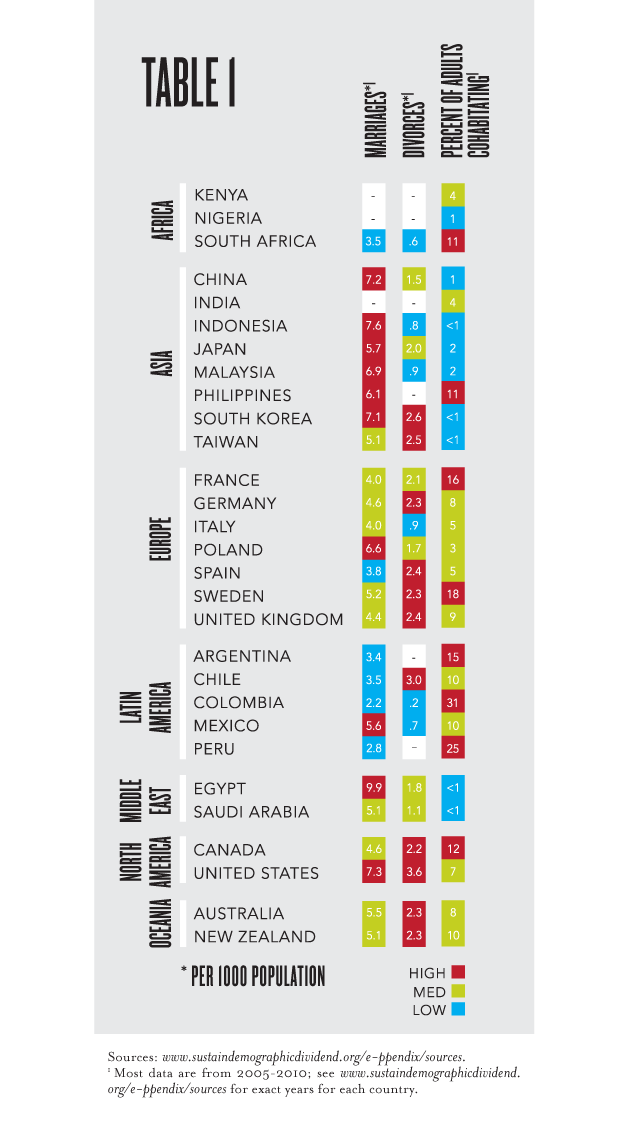 It is also worth noting that divorce rates have converged in the target countries over time.

Not surprisingly, cohabitation is more common in countries with comparatively low marriage rates, and uncommon where marriage is stronger (see Table 1 and Figure 1).

There are several countries where less than 2 percent of adults are living together but unmarried: China, Taiwan, South Korea, Japan, Indonesia, Malaysia, Egypt, Saudi Arabia, and Nigeria. This list primarily consists of the high marriage-rate countries of Asia and the Middle East, but it does not include the Philippines where marriage is quite common, but where cohabitation is as well (11 percent).

There is considerable variation in cohabitation levels across Africa. For example, Nigeria’s inclusion in the list above reflects a recent shift: the cohabitation rate fell from 7 percent in 1990 to 1 percent in 2008.4 (The decline in cohabitation in Nigeria may be linked to religious changes in the country, as Islamic and evangelical Protestant groups have tried to assert more control over young adult sexuality in recent years. For instance, the imposition of Islamic Sharia law in much of the core north of Nigeria appears to have reduced premarital sex.5 Further, a significant percentage of born-again Christian youth in eastern Nigeria report either never having had sexual intercourse or adopting secondary sexual abstinence.6) In contrast, cohabitation is 4 percent in Kenya and 11 percent in South Africa.

Among European countries, Poland, Spain, and Italy have relatively low cohabitation rates while France and Sweden have some of the highest rates. Cohabitation is obviously common in the Americas, but Colombia is still an outlier at 31 percent, 13 percentage points higher than even Sweden, the leader in cohabitation in Europe at 18 percent. However, it is important to note that consensual unions have a long history in Latin America, where they often function much like legal marriages and are typically more stable than cohabiting unions in North America. 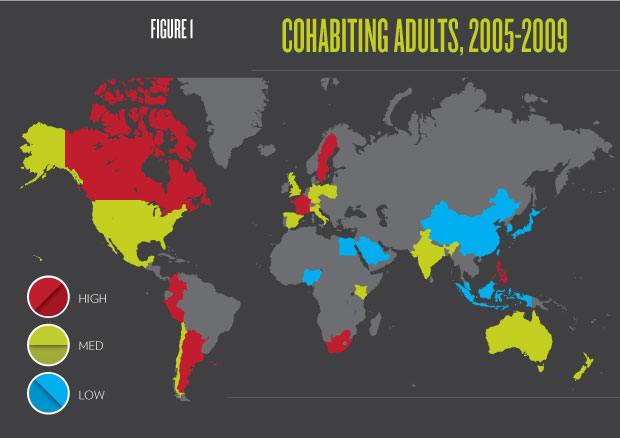 When these statistics are taken together, adults in Asian countries are more likely to marry and less likely to cohabit than their counterparts in other regions, but the stability of their marriages has declined over time. Middle Eastern countries have not witnessed this same rise in divorce, and for them cohabitation is essentially nonexistent; consequently, these countries appear to maintain a traditional attitude toward marriage. Countries in Latin America exhibited low divorce rates in the 1970s (divorce was illegal in some of our target countries in 1970), but since that time rising rates of divorce and high rates of cohabitation in many South and Central American countries demonstrate that marriage is not as normative a part of the adult life course in this region as it is in Asia and the Middle East. African adults are also spending fewer of their adult years married than they did in the past.7

European adults also have a relatively low likelihood of being married, though this generalization pertains mostly to Western Europe. Marriage is common and cohabitation uncommon in the United States compared to Western Europe, but a high divorce rate prevails. Canada more closely resembles a European country than its neighbor, the United States. Similarly, Australia and New Zealand have marriage, divorce, and cohabitation rates that look more like Europe than like their Southeast Asian neighbors. Overall, then, marriage continues to play a strong role in guiding the adult life course in Asia and the Middle East, while its hold is somewhat weaker on nations in Africa, the Americas, Europe, and Oceania.