Marriage and the Baby Carriage

WHICH SECTORS OF THE ECONOMY BENEFIT MOST?

Strong, sustainable families pay long-term dividends to the entire economy. But some sectors of the economy appear to do especially well when adults marry and have children.

In the United States, married parents (age 18-50) spend markedly more money—on a household and a per-capita basis—on child care, food at home, healthcare, home maintenance, household products and services, life/personal insurance, and pets and toys, compared to single, childless adults of the same age (see Table D1 and Figure D1). They outspend other households in each of these spending categories, except for “pets and toys,” where childless marrieds spend more—probably because they are laying down big bucks for Fido.

This means that the bottom-line performance of companies that focus on these sectors of the economy is likely to be linked to the health of the family in the United States—and much of the globe, for that matter. Companies as varied as Home Depot (home maintenance), Johnson & Johnson (healthcare), Kellogg (cereal), Kroger (groceries), Mars (sweets), Mattel (toys), Northwestern Mutual (life insurance), Procter & Gamble (household products), UnitedHealth (health insurance), and Target (general merchandise)are probably more likely to profit when men and women marry and have children. 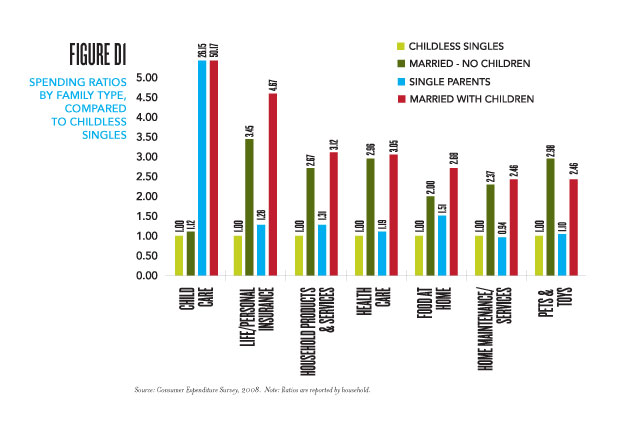 WHAT MAY BE DRIVING THE LINKS BETWEEN FAMILY TYPE AND CONSUMER SPENDING IN THESE INDUSTRIES?

1. HOUSEHOLD SIZE. Adults who are married with children typically have more people in their households than do other adults. To serve the needs of all the adults and children in their homes, they are more likely to buy many brands in bulk, from Bounty to Tide, and to fill their shopping carts at the local grocery store.

2. CHILDREN. Obviously, adults who are married with children at home spend more money on child- related products than childless singles. But they also spend more money on their children than do single parents. This is largely because their household mean income ($91,119) is higher than that of single parents ($35,845).1 Married parents are far more likely than single parents to drop money on Huggies Diapers or the latest developmental toy from Sassy. They also spend more on private schooling and tutoring than any other family type—Sylvan Learning, take note.

4. RESPONSIBILITY. Adults, especially men, become more responsible after they marry. This shapes their consumption habits. For example, men put more hours in at the office and fewer hours at the local bar after they marry.3 Indeed, as Table D1 indicates, the product that men and women who are married with kids spend less money on than childless singles is alcohol. Married parents—especially married men, who continue to be the primary earners in most families today—also spend more money on life insurance than other households. Thus, Anheuser-Busch takes a hit when men and women get in the family way, whereas Northwestern Mutual sees its market share expand.

Clearly, some industries—from household products to juvenile products to life insurance—seem more likely to profit when families are strong. In all likelihood, then, many companies would be performing much better today if the U.S. marriage rate had not fallen by half since 1970.4 Rising rates of divorce, single parenthood, and lifelong singleness—not to mention childlessness—have degraded the market for companies that depend on married families. 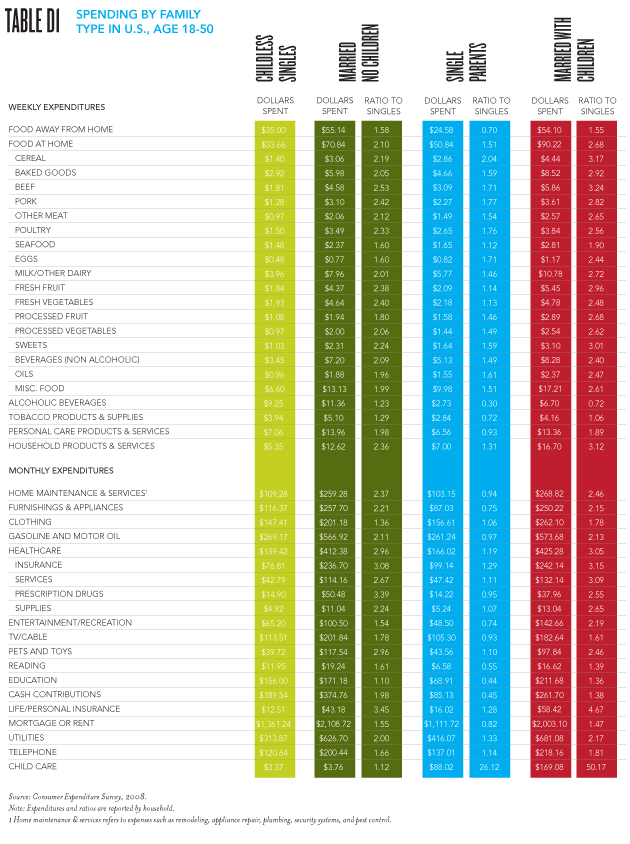 WHAT CAN CORPORATIONS THAT DEPEND ON STRONG FAMILIES DO TO INCREASE THEIR CUSTOMER BASE AND BOTTOM LINE?

For a start, we recommend three steps:

1. PUBLIC EDUCATION CAMPAIGNS. Broad swaths of the United States and the developed world (see Table 3 in the “Global Family Culture” section) are unaware of the fact that marriage is not just a “piece of paper” but rather an institution that delivers a whole range of benefits to adults, children, and communities. Companies whose fortunes are linked to the health of the family could get behind existing social marketing campaigns—such as the National Healthy Marriage Resource Center’s “Two of Us” campaign—to educate the broader public about the value of marriage and family life and thereby foster more family-friendly attitudes among the general public.

2. ADVERTISING. Companies whose fortunes are linked to the health of the family, such as Procter & Gamble, spend billions of dollars each year on advertising. Brand managers are often given the task of maximizing a specific product’s sales without considering the subtle and not-so-subtle signals their advertising could send off that could impact the parent firm’s overall sales. Executives with oversight across brands should ask themselves a simple question: Do the messages used in our advertising make family life look attractive? Or do they exalt single living? Obviously, it’s in their long-term interest to do more of the former.

3. PHILANTHROPY. There are thousands of nonprofits, ministries, and think tanks working to help marriages and families in the United States and around the globe. Family-dependent companies should make a point of supporting organizations whose family-friendly goals align with their bottom-line interest in families.

In recent decades, numerous corporations have supported initiatives to help sustain the physical environment. Now it’s time for companies to be similarly attentive to the sustainability of the family, an institution that socializes and supplies not only future workers but current and future customers. Corporate profits in industries whose fortunes are linked to the health of the family— from grocery chains to insurance companies—are likely to perform particularly well when families are strong. Companies in these industries should take the lead in doing all they can to increase the odds that, among adults, love is followed by marriage and the baby carriage.